Clinical trials test many types of treatment such as new drugs, new approaches to surgery or radiation therapy, or new combinations of treatments. Many years of research go into the development of a new drug or treatment. However, treatments that work well in the lab or in animals do not always work well in people. Therefore studies must be done with volunteer patients to determine whether the promising treatments are safe and effective.

Why are clinical trials important?

Clinical trials are essential for progress in the treatment of all diseases, not just cancer. Each study is designed to answer scientific questions and to find new and better ways to treat diseases such as cancer.

If a new treatment proves effective in a study, it may become the new standard treatment that can help many patients. Because of progress made through clinical trials, many people treated for cancer are now living longer and have a better quality of life. 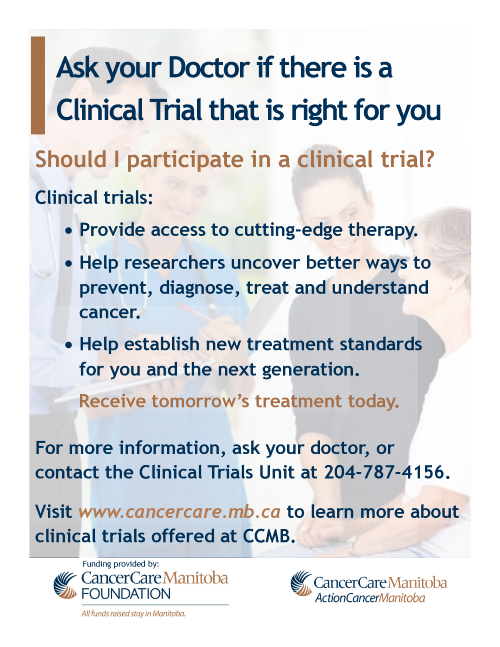 The Canadian Partnership Against Cancer has a website where patients can search for clinical trials in Manitoba and across the country. You may search by cancer type, drug, a keyword or phrase. The search will call up trial details, including recruiting status, locations, eligibility, a trial description, and summary. Patients can print out and review this information with their doctor or care team. Only a doctor can refer a patient to a trial. The site also has an option to sign up for trial alerts.

How do I get involved?

Each trial has its own set of eligibility factors, such as age, disease status, and past medical history. Your opportunity to participate in a trial also depends on whether a suitable trial is being conducted at a treatment centre accessible to you. Your doctor will discuss treatment options, including the best standard treatment available and the possibility of participating in a clinical trial.

If you are interested in participating, your doctor or a research nurse will review the details of the trial with you. Before starting a trial, a process called informed consent takes place. Participation in a clinical trial is always voluntary.

What does informed consent mean?

Informed consent refers to the communication process that occurs to allow you to make an informed choice about participating in a clinical trial. The trial is explained in detail, including the treatment plan, all the possible benefits and known risks, required tests, frequency of visits, and other treatment options. You are encouraged to ask questions during this process.

You will be provided an informed consent form to take home and consider away from the clinical setting. The form will contain specific information about your trial. If you decide to participate, the form should be signed in the presence of a research nurse.

Further tests may be required to determine eligibility.

How Are Clinical Trials Conducted?

Researchers follow a carefully designed treatment plan called a protocol. This spells out the rules of how the treatment is administered, how many people will take part, what tests they will receive and how often.

Generally, clinical trials compare two or more treatments. An equal number of people are randomized to one treatment or another. The treatment choice is decided by chance, often by a computer. Participants go through their treatment and are followed along with everyone else on the trial, usually for several years. All symptoms, side effects, and the participant's progress are closely monitored.

Some trials are open-label. This means the participant receives the new treatment being tested, or the standard treatment and everyone is aware of which treatment is being given.

Randomized and blinded trials eliminate bias in the selection of participants (having the study's results affected by human choices or other factors not related to the treatments being tested).

Sometimes placebos are used when the standard treatment is to just observe, or give no further treatment. A placebo is a tablet, capsule, or injection that looks like the drug being tested, but contains no drug. Some patients will receive the new drug and others a placebo, to compare whether the new treatment works better than no treatment at all.

What protection do participants have?

The ethical and legal codes that govern medical practice apply to clinical trials. Clinical research is federally regulated with built-in safeguards to protect patients.
Each protocol is approved by a Research Ethics Board which reviews the protocol to ensure that the research will not expose patients to extreme or unethical risks.
All patients in clinical trials are carefully monitored and during treatment follow-up as applicable per individual protocol requirements.

Studies are planned to safeguard the medical and psychological health of patients as well as to answer research questions. If the treatment is not helping the patient, the doctor can decide to take the patient off the study. Also, if there is firm evidence that one method of treatment is better than the others in a study, the trial is stopped and all patients in the trial are given the benefit of the information.

What are the advantages?

What are the disadvantages?

The Clinical Trials Unit (CTU) facilitates and coordinates clinical research in the areas of prevention, treatment, palliation, and quality of life. Data collected from our participation in national and international research has influenced the standard treatments used today. Through clinical trials, patients are provided with the opportunity to access state-of-the-art treatments and to raise the profile of CCMB as a significant contributor to the research being done worldwide.

Of the approximately 120 adult and pediatric clinical trials open to participate each year, the CTU enters an average of 300 new patients while continuing to follow thousands of participants in long-term follow-up. Clinical research conducted at CCMB incorporates studies offered through cooperative groups, pharmaceutical companies, and in-house research. Patients participating in these studies have access to some of the most innovative and cutting edge treatments, tests or prevention tools available.

The CTU has extensive experience across a spectrum of clinical trial activities, and offers the following services:

Breast Cancer Prevention Trial (BCPT) in the 1990s looked at Tamoxifen for preventing breast cancer. Manitoba accrued 140 of the 13,388 women. Study results in April 1998 showed a 49 % reduction in breast cancer among the high-risk women who took Tamoxifen.

STAR, a Study of Tamoxifen and Raloxifene. Manitoba accrued 139 of the 19,490 women. Results in April 2010 indicated that raloxifene retained 76% of the effectiveness in preventing invasive disease and grew closer to tamoxifen in preventing noninvasive disease while remaining less toxic. Tamoxifen remains superior to raloxifene in reducing the risk of both invasive and non-invasive breast cancer among postmenopausal women at increased risk.

This trial was designed to determine if Exemestane can prevent breast cancer in healthy postmenopausal women at increased risk for developing breast cancer. Manitoba accrued 103 of the 4560 women. Trial results released in June 2011 demonstrated a 65% relative reduction in the incidence of invasive breast cancer compared to the placebo control with no serious toxicity and minimal quality of life differences. This is a significant improvement over Tamoxifen and raloxifene, which had been used for breast cancer prevention. Both reduced breast cancer incidence by about 50% but had significant side effects and therefore had been little used in this preventative role.

In May 2016, CCMB, in collaboration with Mayo Clinic Rochester, opened the GENRE breast cancer prevention study. The GENRE study is a pilot study to determine if a polygenic risk score influences the decision to accept breast cancer preventative medications (Tamoxifen, Raloxifene, or Exemestane) among non-BRCA women at risk. CCMB has now been involved with the first clinical trial of polygenic risk score (PRS) in the world. There was an overwhelming interest in the GENRE study. CCMB quickly met the accrual target of 75 patients in 18 months. The results of this study are not yet known.

N2 - It Starts With Me - Learn more about clinical trials 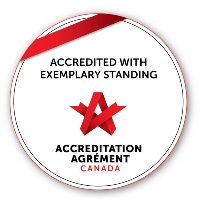